History has a way of repeating itself, only this time it feels fresh and new. It seems when governments rule with a heavy hand The Little People always find a way to rebel and be heard – through art. 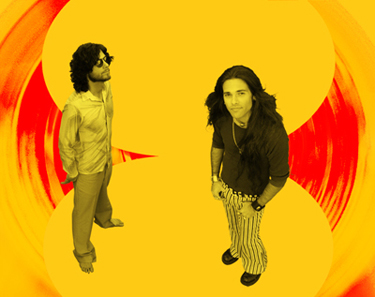 The LP's are no different. Just as the censorship during the McCarthy era or political unrest of the 1960's brought music and art to new heights, the new millennium brings us this 2 man band emerging with much to say in a beautiful, sometimes haunting way.

The LP's are Dorian Heartsong and Jesse Lee Jacobs. They met in LA in 2001 and amidst a seemingly vapid community found they had a lot in common politically and musically. Their first collaboration was a song called "Anything For A Change," which appeared on the sound track of the feature film, "The Devil Cats." Soon after, Heartsong and Jacobs took to writing and recording a number of tracks which would become this eclelctic album called, "Earthbound."

The two men have impressive backgrounds. Heartsong has a B.A. from Berklee School of Music. Co–founder of the platinum band Powerman 5000, he toured internationally from '95–'01. Since then he has played, written, and produced for many projects. Thomas Wictor of BassPlayer Magazine wrote: "Dorian's tone set's him apart" and his "distinctive sound" adds to the music. Jacobs, a self–taught musician has a vaults worth of work on tape. Mainly, a vocal frontman and songwriter, he plays with the power of words. His lyrics have a poetic style reminiscent of say, Jim Morrison. His voice has such power & range. Of his last album it was written: "But most importantly, underneath the tripped out production stands some creative songwriting and lyrical work that reveal the depth of Jacobs mind and soul" –Robbie Gennet of Keyboard Magazine.

"Earthbound" is a total collaboration between the two. It is one of those rare finds where the music is truly first, with no trace of industry bullshit to crap it up. The two worked tirelessly for 12 months in studio playing every instrument, from guitar, drums and bass, to keyboards, balalaika and violin. They included a couple of guest artists to sit in – a french singer on the track "Nothing" and an accomplished horn player for "Empathy." The album feels very big – like a Pink Floyd concert.

"Earthbound" is honest, like not much else coming out today. It deals with real, thoughtful issues. Greed, depression, the decline of civilization, the human spirit. And yet, it does it effortlessly with music so full and impressive that one might just forget about the themes when the groove really gets going. "Earthbound" and the LP's music takes you on a journey through time and space, with vibrant instrumentation, mind blowing vocals – a beckoning call for change.